Because I said so!”

Which of these phrases most resonate with you and the way you were parented as a child?

If you are a parent, which of these phrases do you most say to your own child?

If you’re a parent and you’re like me, you probably find yourself saying things to your child that you heard your own parents say to you – whether it’s intentional or not. Research shows that we are more likely to parent based on the parenting style we grew up with.

There are four parenting styles researchers have identified as being common among parents:

Each style takes a different approach to raising children and can be identified by a number of different characteristics. Each style has also shown to have different effects on children.

I’m going to summarize each of the four parenting styles, and as I do, think about which style most describes you as a parent or how you were parented as a child:

Parents with this style are typically less nurturing.

Authoritarian parents believe kids should follow the rules without exception. Expectations are high with limited flexibility and they demand obedience with little negotiation possible.

Authoritarian parents are famous for saying, “Because I said so,” when a child questions a rule or expectation. They make the rules and enforce the consequences with no explanation and little regard for a child’s opinion. They only allow one-way communication and any attempt to reason with them is usually seen as backtalk.

Stern discipline and harsh punishment are common with authoritarian parents. Authoritarian parents are invested in making kids feel sorry for their mistakes and making sure the child understands the parent is in control and has the authority. 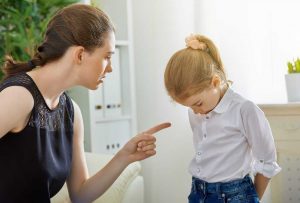 Children whose parents have an authoritarian parenting style tend to:

Do any of these statements sound like you? If they sound familiar, you might be a permissive parent.

Parents in this category tend to be warm and nurturing.

However, permissive parents are more like friends than parents to their child. Communication is open and they encourage their children to talk with them about their problems, but they offer limited guidance and direction and let their children figure problems out on their own. They tend to only step in when there is a serious problem.

Permissive parents mostly let their children do what they want and have the attitude of “kids will be kids.” They are lenient and do not like to say, “no”, or disappoint their child. They set very few rules and boundaries and they are reluctant to enforce them.

When permissive parents do use consequences, they may not make those consequences stick. They might give privileges back or allow a child to get out of a grounding or time-out early. 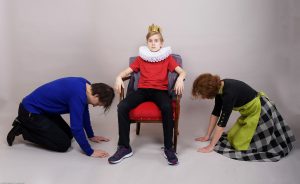 Children of permissive parenting tend to have the worst outcomes as they:

Do any of these statements sound familiar? If they do, you might be an uninvolved parent.

Uninvolved parents use no particular discipline style. They do not set high standards or firm boundaries for behavior. They give their child a lot of freedom, let them do what they want and generally stay out of their way. Communication is limited, and as a result, they have little knowledge of what their children are doing or who they are with.

Uninvolved parents are indifferent to their children’s needs and uninvolved in their lives. They adopt an attitude that the child can raise themselves.

Some parents may make a conscious decision to parent in this way. While for others, being an uninvolved parent, is not intentional. Some parents simply lack knowledge about child development and are unsure of what to do. Sometimes a parent falls into this category because they are overwhelmed with other problems, like work, paying bills, managing a household or dealing with their own mental or physical health issues. 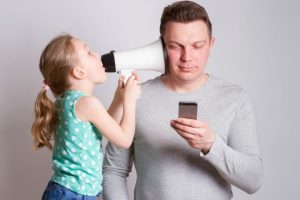 Authoritative parents are warm and nurturing.

They are supportive and provide their children with autonomy and encourage independence while also having high expectations and rules that have been clearly stated. 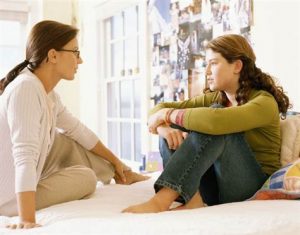 Researchers have found kids who have authoritative parents: 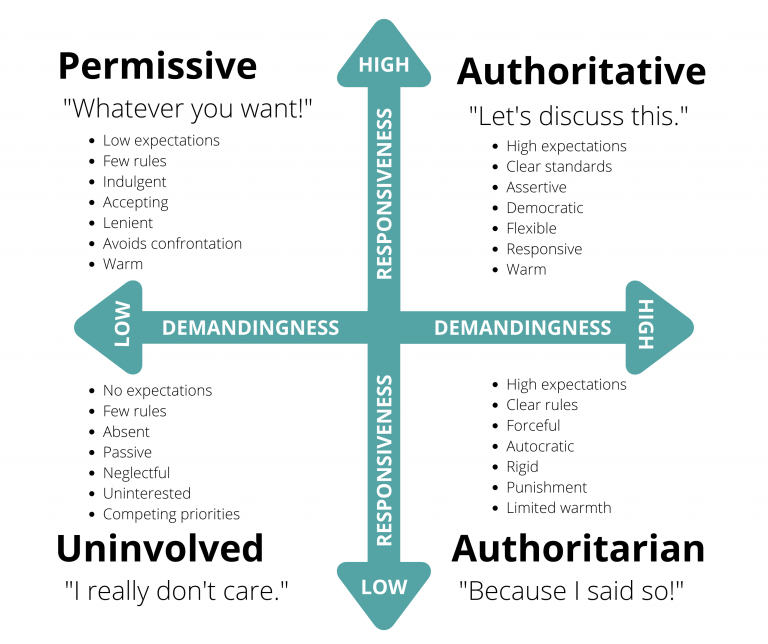 Few of us fit neatly into one single parenting style, but rather raise children using a combination of styles. So, don’t fret if there are times or areas where you tend to be permissive and other times when you are more authoritative. Think of the four styles as a continuum instead of four distinct ways to parent. We need to think about our children and what they need from us at specific points in time. For example, while you might not typically adopt an authoritarian parenting style, there might be times in your child’s life when that style is needed. And sometimes, our parenting is a mix of several styles and we don’t clearly fall into one distinct category.

What is important to know is that the studies are clear – authoritative parenting is the most effective parenting style. While it is easier for children when both parents practice the authoritative style of parenting, some research shows that if at least one parent is authoritative, that is better for the child than having two parents with the same, less effective style.

But even if you tend to identify with other parenting styles more, there are steps you can take to become a more authoritative parent. With dedication and commitment to being the best parent you can be, you can maintain a positive relationship with your child while still establishing your authority in a healthy manner. And over time, your child will personally reap the benefits of your authoritative style and will very likely parent their children some day in the same way.

How you parent is a gift that will keep on giving in the years to come. Make it a gift worth opening and keeping.