Starting at a very young age my son loved country music and even more so, loved to dress as a cowboy. He was the proud owner of cowboy boots, a cowboy hat and a big belt buckle by the age of two. His outfit was always pulled together with blue jeans and a button-down shirt. He refused to dress any other way. 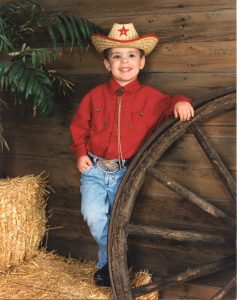 He was in the 1st grade.

In 1st grade, my son started playing soccer on the playground with his classmates during recess. Every day, during every recess, he would play soccer.

Each day I would pick him up after school and we would make the short drive home. It was just the right amount of time to hear about his day. Most of the time, the talk was about how many goals he made that day playing soccer.

One day, however, the conversation about soccer took a slightly different turn. When he got into the car, he insisted that we go shopping for new clothes for him. More specifically, he wanted me to buy him sweat pants to wear to school.

I was taken by surprise with his request. In the past, I had tried to get him to wear sweat pants, but with no luck. So, I was curious to learn more about why he had changed his mind about wearing them now.

So I asked him why he so desperately needed sweat pants. His response was, “I can’t play soccer very well in jeans. EVERYONE who plays soccer at recess wears sweat pants, so I need them, too.”

The logical side of me could definitely see how wearing sweat pants would be better than jeans when playing soccer, but I was struck by his statement that EVERYONE who plays soccer wears sweat pants.

I made a few quick decisions that day in the car driving home from school. First, I decided I wasn’t going to rush to the store to buy him sweat pants. Secondly, I decided to give him a math assignment. I asked him to go back to school the next day and count how many soccer players were wearing sweat pants and how many weren’t. Once he reported the numbers back to me the next day I promised we would re-visit the conversation about buying sweat pants. I told him that I trusted his excellent math skills to get an accurate count.

The next day after school my son couldn’t wait to get into the car to give me his sweat pants report.

“Mom! I counted how many people were wearing sweat pants playing soccer today!”

“There were 6 who were wearing sweat pants,” my son replied.

“How many were not wearing sweat pants?” I curiously asked.

“So, there were 6 who were wearing sweat pants and 9 who were not wearing them,” I summarized.

“Well, not until we talk about this some more,” I responded.

I reminded my son how he said he needed sweat pants because EVERYONE who plays soccer at recess wears them. However, according to his count, NOT EVERYONE was wearing them. In fact, I helped him to see that there were actually more soccer players that were not wearing sweat pants than those who were.

I helped him to see that what he perceived to be true the day before really wasn’t true. By doing the math he was able to reveal the truth.

I’m sure you have heard something like this from your child more than once, “But, everyone’s doing it. I’m the only one who isn’t!” At some point, your child will believe they are the only one who isn’t wearing the latest fashions, staying out late, having a cell phone or having access to social media. The need to fit in and be accepted grows in importance with kids the older they get. The pressure to do what they think everyone else is doing increases.

The question is, “Are your kids right? Is everyone really doing these things?”

Starting in the middle school years and through high school more kids will begin to experiment with alcohol, cigarettes and other risky behaviors. If we look for kids who are participating in these behaviors, we will find them. So, will your kids.

For example, what would catch your attention most – six teenagers walking down the sidewalk smoking cigarettes or thirty teenagers behind them who aren’t smoking? Without doing the math, we are likely to focus on the six who are smoking and quickly conclude that a lot of kids are smoking cigarettes. We might even believe a majority of kids are smoking. Your kids aren’t going to stop and do the math either. They are likely to come to the same conclusion as you.

What’s the danger in coming to this conclusion? Research shows the sooner a child perceives everyone their age is smoking, drinking or doing other risky things, the more likely they will do the same. Why? Because your kids’ perceptions will drive their behaviors.

And, the sooner you perceive your child is the only one who isn’t doing these things, the more likely you are to relax on your rules and expectations for your child and give in. Why? Because your perceptions drive your behaviors, too.

The problem is most kids and parents are wrong on what they think everyone is doing, especially when it comes to risky behaviors. The reality is a majority of kids do not drink alcohol, smoke cigarettes or engage in risky behaviors. According to the 2019 National Monitoring the Future Study, conducted by the University of Michigan, 92% of 8th graders, 82% of 10th graders and 71% of 12th graders had not used alcohol in the past 30 days. Chances are your kids aren’t any different than their peers nationally or even locally. A majority of them are doing what is right and normal. They are NOT engaging in risky behaviors.

So, the next time your child says, “Everyone else is!”, don’t believe them so quickly. Look around. Ask questions. Talk to other adults and parents. Do the math.

Chances are your kids are already doing what everyone else is doing. Don’t expect anything different or less.

If you’re wondering whether my son got the sweat pants he asked for, the answer is, “Yes!” But, I bought them with the understanding between him and I that he was getting them because they are easier to play soccer in and NOT because everyone who plays soccer wears them.

Buying the sweat pants also ended the days of my son dressing as a cowboy. From there on, his life became focused on doing what he needed to do to become the best soccer player he could be. I would like to believe the sweat pants in 1st grade contributed to his soccer achievements over the years – making the varsity high school soccer team as a freshman, playing college soccer, and eventually, becoming the youngest varsity high school head soccer coach in Nebraska at the age of 22. 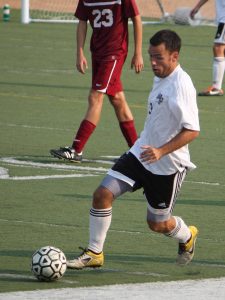 But, more importantly, I hope the memory of those sweat pants remind him of the importance of still doing the math when he thinks he needs to do something he perceives EVERYONE else is doing.